Edward P. Cardillo is an inventive author, coming at horror and science fiction from exciting and oblique angles.  His Automaton series is truly ingenious.  Personally, I’ve gotten to know Ed through our shared relationship with J. Ellington Ashton Press.  He never ceases to amaze me with his intelligence and wit. 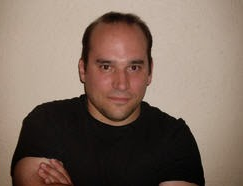 The Creeping Dead, Books 1 and 2, published by Severed Press in 2015. The first book starts with a hurricane striking a small tourist town in New Jersey. As if this weren’t enough, the undead arrive on the scene.

Ed followed this very successful release with The Creeping Dead 2 in 2017.

I Am Automaton (Severed Press) has won three Reader’s Favorite International Awards and was also a selection for Zombie Book of the Month in 2014.  He has written two additional follow-up books.

His book, The Odd Tales of an Old Man (J Ellington Ashton Press), has received effusive praise from critics and readers alike.  Midwest Book Review gave it 5 out of 5 stars.

Why do you write about dark and scary things?

It’s just the way I’m wired. Some people like roller coasters, some like haunted houses. I like writing and reading horror…and haunted houses. Not roller coasters, though. As a clinical psychologist, I’m fascinated with fear. It’s an emotion that’s crucial to the survival instinct, yet in excess, it can bog down one’s life. Horror fiction is a safe way to feel the exhilaration of being the object of the hunt, the chased pray facing a superior predator.

When did you know you wanted to be a writer and how do you go about the writing process?

I’ve known I wanted to be a writer since I’ve been a kid.

It depends on the genre. For my more sci-fi oriented horror, I like to plan plots and subplots, and outline. Plot twists and action scenes need to be choreographed and red herrings convincingly executed. Then, of course, there’s the research on technology, weaponry, military protocol, politics, etc.

My pure horror/dark fantasy tends to be more organic, the source of my most potent elements being actual nightmares I’ve had. I appreciate a good nightmare. When I wake up in a cold sweat, I write everything down for use later. My wife can tell when I’m “on the jazz” with a good idea because I toss and turn and cry out at night. But make no mistake…I actually love a good nightmare. Once again, it’s the way I’m wired.

What advice do you have for other writers?

Write, submit/query around. As you’re doing that, write and submit the new stuff while submitting the old stuff. Keep writing. Submit that new material, and so on and so on, ad infinitum. Unless you have aspirations to publish through a big 5 house, if you write genre fiction, don’t worry so much about chasing agents. Query publishers directly if they allow it, but make sure you follow their submission guidelines to the nine.

Don’t be afraid to submit your work to contests. You never know. What’s the worst that can happen—you don’t win? My first two books in the “I Am Automaton” trilogy won Reader’s Favorite International Book Awards as unpublished manuscripts, the first book finishing in the same category with a NY Times Best Seller. That got me attention and helped me land a book deal with Severed Press. Book 3 won as a published book, making it an award-winning trilogy. While promoting “I Am Automaton,” I attracted the attention of J. Ellington Ashton Press, who snatched up “The Odd Tales of an Old Man” and commissioned “Feral Hearts.”

What is your favorite zombie movie and why?

The original “Night of the Living Dead.” I loved the stripped down, realistic sensibility. The movie wasn’t overproduced with uber special effects-laden zombies with state of the art gore effects. The zombies looked very human, which I find terrifying.

What’s up next for you?

I have a novella coming out for J. Ellington Ashton Press titled The Dark is Full of Monsters.  It is a deeply psychological horror tale in which the characters find themselves an unsettling territory. It is filled with monsters of the human kind, which can sometimes be the most scary kind.

I Am Automaton 2: Kafka Rising

The Odd Tales of an Old Man

Find Out More About Ed

This entry was posted in Uncategorized.